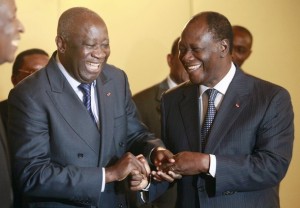 Laurent Gbagbo and Alassane Ouattara shake hands in Ivory Coast last year. The deadly struggle between the two over presidential legitimacy has been largely overlooked by the media. (Photo credit: Thierry Gouegnon)

Without a doubt, this has been a very newsworthy year, historically speaking. There’ve been massive protests throughout the Middle East since the end of last year, and corrupt regimes have been been toppled in Tunisia and Egypt. Civil war has erupted in Libya, sparking international outrage and a coalition military intervention on behalf of the rebellion. And of course, an earthquake and tsunami of unparalleled ferocity swept across Japan and has set off a chain of events at the Fukushima Daiichi nuclear power plant, causing a new wave of nuclear worries, in Japan and around the world.

But in this deluge of enormously significant world events, it’s so easy to lose track of the smaller, yet still significant things going on around us. I say this in particular reference to news and world (or somewhat more local) events.

One place I’ve seen this pretty strongly recently is in the coverage (or lack thereof) of the humanitarian crisis in Ivory Coast (or Côte d’Ivoire, in the French spelling) over the presidential election results of last year. Incumbent president Laurent Gbagbo disputed the results, which showed that his opponent Alassane Ouattara had won the election. The country has been in deadly struggle ever since, with Gbagbo using veritable death squads to wipe out opponents and suppress supporters of Ouattara, despite international recognition of Ouattara as the winner. The conflicts have left possibly hundreds dead, and only now is Ouattara beginning to get the upper hand; and not from the international community. This issue is just now starting to become major news.

The point I’m trying to make is this: When there’s a lot of big news going on, as there has been (in spades) this year, we tend to forget about smaller things. I’m pretty guilty of this, as you can see in many of my posts and in my most-used tags, but the point still stands. A lot of the time, I focus too heavily on just the big-name issues, as do many others I know.

In a way, this connects to another post of mine about why we should all read the news. Just as it’s important to stay up to date on major events in our world through the innumerable media outlets available to us, it’s crucial that we look behind those events, so to speak, to what may be happening in other parts of the world.

The conflicts happening in the Middle East now are enormously important of course, but Americans can’t forget about the problems we still need to sort out in Afghanistan. Libya might be big news for the moment, but let’s not forget about what’s happening in Yemen, Syria, and other countries, not to mention Egypt and Tunisia! The devastation in Japan is heartbreaking, but we can’t neglect the disasters happening elsewhere.

Above all, this post is a kind of call away from too much focus. Our passion for certain world issues or events shouldn’t keep us from remembering the other crucial things happening in the world, on a local, national, and international level. So stay informed, not just about whatever most interests you, but about whatever is most important to the world!