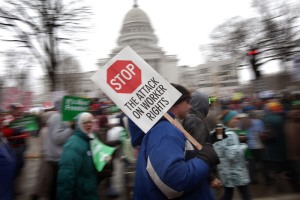 One of the more popular protest signs in an area rife with division and legal controversy.

The political situation in Wisconsin just keeps getting more and more sticky. As you’ve probably heard by now, Republicans in the WI state Senate forced through their union-busting law through a tricky technicality – which seems like a pretty underhanded way of legislating to me.

What was this trickery? Well, the senators, using a ploy that some Democrats in the state have denounced as illegal, removed parts of Governor Walker’s bill that were related to appropriating funds (technically at least), which allowed them to pass the bill without the minimum quorum of 20 senators required for bills of that nature.

The Democratic senators who retreated to Illinois to hold the bill back, known by some as the “Wisconsin 14,” were outraged by the shifty legality of the Republican senators’ maneuver. And who can blame them? Even after all of their determination and the furious protests of state workers in the capital, the Republican senators have said, essentially, “Enough is enough.” The consequences of this decision are more or less exactly what Gov. Scott Walker wanted to happen: Unions have lost their collective bargaining abilities and have suffered an effective cut in pay.

To me, this seems like pure shenaniganery (which is now a word) on the Republicans’ part. Now, it’s true that these officials were elected by the people back in November for a reason, and that reason was a new desire for fiscal conservatism. So it makes sense that the newly elected Republicans would want to honor that desire by effectively cutting the pay of public workers. But what point could there be to taking away collective bargaining rights, except to slice into a stronghold of Democratic sentiment? The idea that “budget” came into the decision is frankly ridiculous.

On the positive side, this tactic has called the newly elected Republicans’ wisdom and discretion into consideration, and as many as 12 Senators may face recall this spring. The political fallout from this decision will no doubt be significant, and protests are still ongoing in Madison. So soon after the national turnover in elected officials from blue to red, it’s possible that new Republicans will be ousted from office before they can even get the rest of their plans into action.

With similar bills under consideration in Indiana and Ohio, and a national rethinking of the role and privileges of unions, it’s hard to say what might happen in other parts of the country. On the one hand, it’s possible that similar bills will be pushed through in other parts of the country, as Republican lawmakers are spurred forward to mimic their Wisconsinite brethren. On the other hand though, I think it’s quite possible that this can be a strong rallying cry for Democrats and public workers’ unions all across the country. Now, it’s possible for them to say, “Look what the Republicans here had to resort to to remove our rights! Don’t let them do the same thing to you.”

And even if no Republicans legislators are recalled after this, chances are this action hasn’t helped their street cred much, and we could see another total turnover in Wisconsin back to the democrats in the next election cycle. And if similar bills are passed elsewhere, by similar tactics, it’s quite possible that Republicans will lose a considerable amount of political momentum, perhaps even on a national level. Many people, even some who voted them into office, feel that GOP legislators and governors have taken the wrong approach to cutting the deficit, and are hacking away at things like collective bargaining rights, which is unlikely to save the country any money, instead of tackling real problems like social security or bloated military spending.